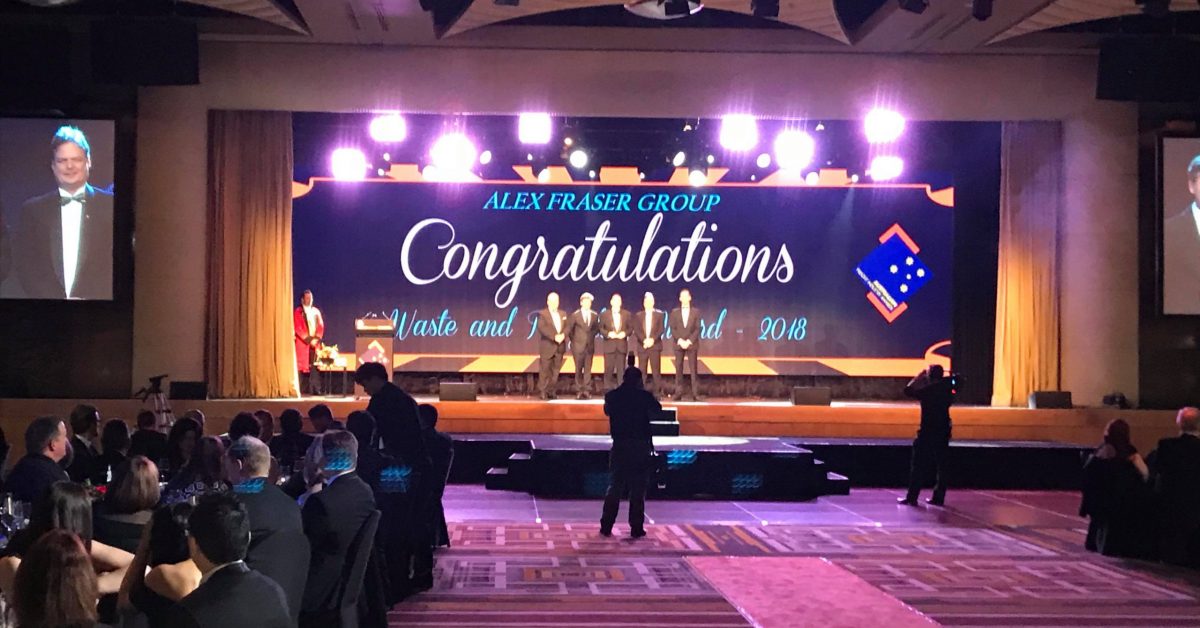 The win was applauded by close to 700 members of the Australian freight and logistics industry who gathered at Melbourne’s Crown Palladium on September 1 to celebrate the Victorian Transport Association’s (VTA) annual awards. The awards recognise excellence from transport operators, supply companies and individuals across a range of categories, celebrating the enormous contribution the industry makes to the national economy. This year’s AFIAs acknowledged the importance of sustainability across the sector through the Waste and Recycling Award.

In his announcement, VTA CEO Peter Anderson acknowledged Alex Fraser for its innovative approach in managing Victoria’s burgeoning glass waste problem, through the recycling of problem glass waste into sand, to be used in the construction of roads and infrastructure.

“This alone has led to the diversion of more than 850,000 tonnes of glass waste away from landfill and has been instrumental in helping Victoria to be the first state to significantly address and tackle this major, global environmental problem,” said Mr Anderson. Sean said it was great to be acknowledged for the positive impact we’re making in the community, for the environment.

“Our new, state-of-the-art plant is in its final stages of commissioning. It will soon see us double our production high specification glass sand, deal with Victoria’s glass stockpiling issues once and for all,” said Sean.

He extended special thanks to Graeme Newman and his team at VicRoads who has been instrumental to the successful uptake of glass sand as construction material through implementation of their progressive specifications. He acknowledged the efforts of research partners, RMIT and Swinburne University. Sean attributed the award to the innovative approach and ambition of Alex Fraser’s technical and production team; and credited the tenacity of Managing Director Peter Murphy, who spearheaded the initiative from its inception.

Seven award winners were recognised at the AFIAs this year, which were proudly sponsored by TWUSUPER and Viva Energy Australia. VTA CEO Peter Anderson announced the winners, who were presented with their award by VTA President Cameron Dunn and Victorian Minister for Roads Luke Donnellan.

“The Australian Freight Industry Awards showcase the very best our industry has to offer and with dozens of high-quality applications received across the various categories it’s clear the industry is committed to innovation, improvement and best practice,” said Mr Anderson.