Behind the construction of ‘Australia’s greenest freeway’ 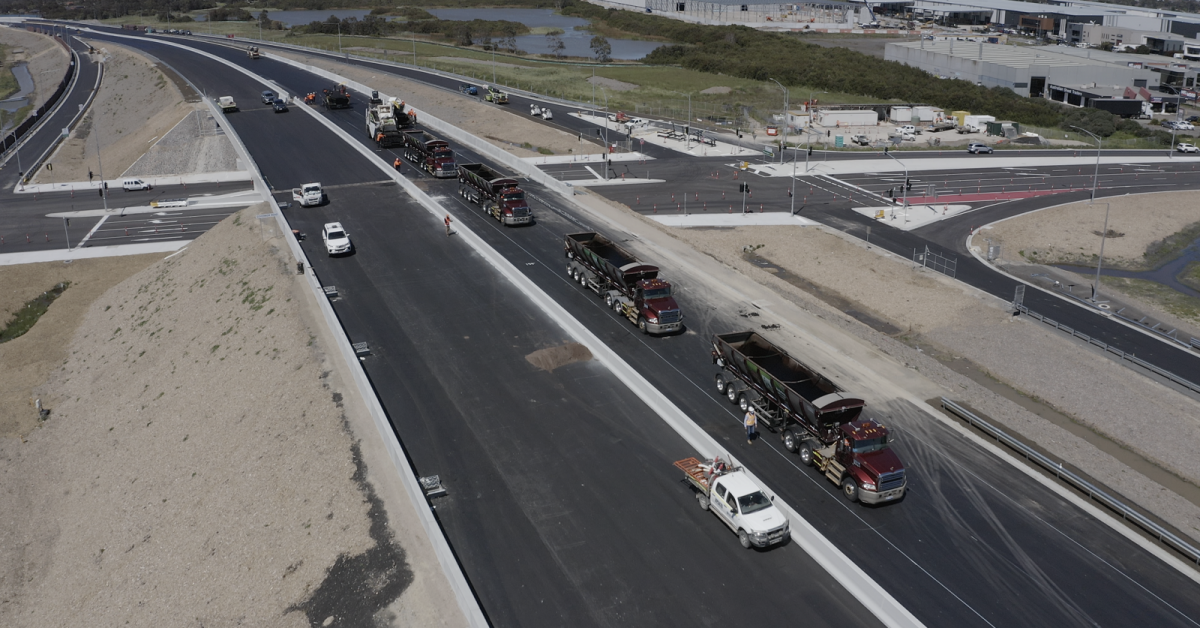 Roads and Infrastructure’s Tom O’Keane looks into the innovation behind the construction of what’s said to be Australia’s Greenest Freeway.

Melbourne’s Mordialloc Freeway has been called ‘Australia’s Greenest Freeway’ for its unique design features and high percentage of recycled material. Roads & Infrastructure speaks to the team at Alex Fraser, one of the project’s key suppliers. Tom O’Keane reports.

The delivery of the new Mordialloc Freeway in Melbourne’s eastern suburbs by McConnell Dowell, Decmil Group and Major Road Projects Victoria (MRPV) in November last year marked the completion of one of Australia’s most sustainable freeway constructions.

Construction of the project commenced in October 2019 and was completed four weeks earlier than scheduled, on 21 November 2021.

MRPV also put strategies in place to minimise the project’s impact on local wildlife and the environment. As a result, more than a million plants, grasses, shrubs and indigenous and native trees were planted along the freeway and 44 per cent of the energy used during the construction was sourced from green energy providers.

This emphasis on sustainable practices extended to the project’s suppliers, who were tasked with delivering innovative sustainable and recycled materials to lower the carbon footprint and broader environmental impact of the project. 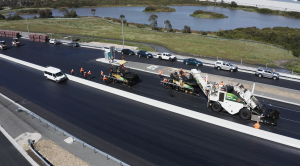 Alex Fraser supplied more than 150,000 tonnes of recycled asphalt for the freeway’s construction

Use of green materials

The supplier introduced a Green Roads asphalt mix design, incorporating much higher volumes of RAP, which in itself contains quantities of aged, high viscosity bitumen. As a result, significantly less new bitumen was required to bind the mix, and was added at a lower viscosity. This high recycled content asphalt was designed to meet VicRoads’ General Registration, and delivered a boost for the project’s sustainability outcomes with big cost and carbon savings.

All up, the use of Green Roads roadbase and asphalt in the Mordialloc Freeway project directly diverted more than 249,739 tonnes of recyclables from landfill; saving close to 1,432,166 kilograms in greenhouse gases, when compared to the use of conventional construction materials and methods. The recycled glass incorporated into the pavement amounted to the equivalent of 204 million glass bottles, or approximately 512,511 yellow wheelie bins.

MRPV’s Brendan Pauwels, the Program Director for the Mordialloc Freeway, says the project’s commitment to greener construction methods will likely act as a benchmark for future projects.

Following the award of the contract to the McConnell Dowell and Decmil Joint Venture, the project required a supplier that could satisfy the requirements of the construction and the specifications for sustainable material. Pauwels says Alex Fraser was able to display its capabilities, particularly with its Sustainable Supply Hubs, which were within close proximity of the project.

“We met with the team from Alex Fraser during the lead up to the procurement process to understand what they could contribute to the project,” he says.

“Alex Fraser has a number of plants which were well located, and they were making some very impressive progress in the recycling space. The joint venture did utilise Alex Fraser, which was a great outcome given what they could offer, including a range of sustainable products and asphalt.”

Utilising its Clarinda Recycling Facility, as well as the nearby Dandenong Asphalt Plant, Alex Fraser was able to provide timely delivery and production of products, which predominantly catered for the project’s asphalt material needs.

The Mordialloc Freeway construction in Melbourne used around 800,000 tonnes of recycled and reused materials.

Pauwels says the project has achieved unprecedented results for recycled asphalt use in Victoria’s major projects.

“I think each project is starting to push the boundary more and more. The percentage of recycled material in this project, I believe, is the highest content which has been achieved by MRPV to date on a new freeway construction,” he says. “Two years ago, 20 per cent was the highest content percentage which we were achieving regularly across the board on projects.”

According to Pauwels, the specifications introduced by the Victorian Department of Transport (VicRoads Standard 407), as well as momentum within the industry have both been key factors in increasing the use of recycled materials.

“We continue to understand the nexus around solving some of the challenges in using recycled materials, from a maintenance perspective, the design perspective and the fire risk perspective Hopefully, other projects can jump off the back of this initiative,” he says.

To improve rideability, Alex Fraser’s asphalt crews used two pavers in unison, which were continuously fed with asphalt by a single shuttle buggy. This allowed multiple lanes to be paved seamlessly.

“The main reason why we used this technique on the project is that you can achieve a higher quality paving outcome. You can achieve greater compaction and also allowed us to cover a greater distance throughout a single day’s worth of operation,” says Camilleri.

Camilleri says the technique helped to optimise one of the project’s most precious commodities, time.

“This became especially important when we needed to make up time due to COVID-19 delays including Melbourne’s lockdowns and industry shutdown,” he says.

“This process is extremely effective in reducing the bumps in the section below the surface, meaning we achieved the smoothest finish possible in the top layer of asphalt,” says Camilleri.

“The use of echelon paving not only reduced the construction timeline but also provided a high quality pavement with improvements in longitude joints that should translate to a longer lasting pavement,” he adds.

Alex Fraser Managing Director Peter Murphy says the outcomes of the project have been exemplary. “The results speak for themselves. When motorists drive on this freeway, they will experience one of Melbourne’s smoothest rides, and a pavement quality that has surpassed all expectations,” he says.

“The Mordialloc Freeway might not only be Melbourne’s greenest road, but its best road.”

This article was originally published in the March edition of Roads & Infrastructure Magazine. To read the magazine, click here.